Just a placeholder for now

So, I am going to have find somewhere to host some pictures properly. Until then, I am parking these here. 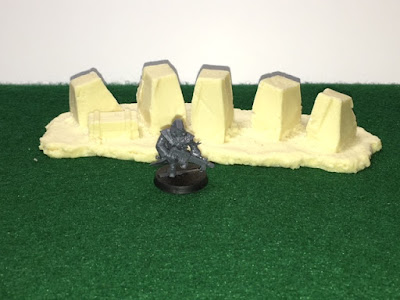 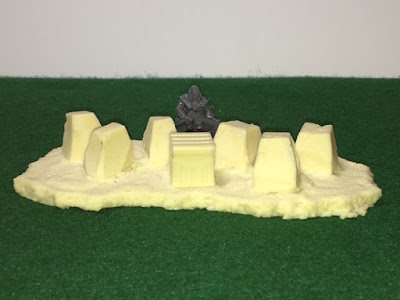 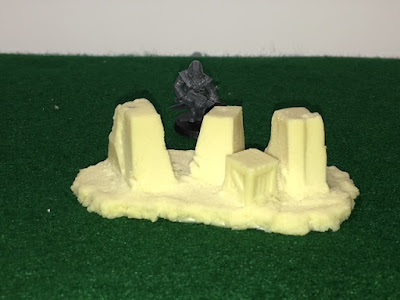 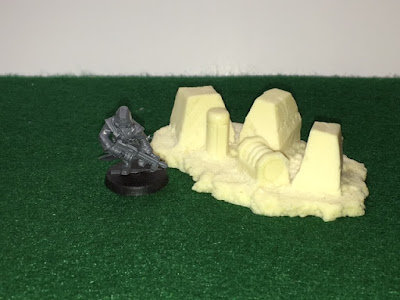 Well, aside from that aforementioned "Liberty or Death" set, I have also added the King and Country starter for Pike & Shotte.  And, while some models have been painted so far this year, I am very much in the hole indeed.

Off to continue painting, but I thought that I should start trying to post more often anyway.
Posted by Garou at 4:01 PM No comments:

So, I had been painting pretty much every day.  Even 15 or 20 minutes at a time is starting to add up, and pretty soon, I should actually start seeing some of those orcs near completion.  The nice thing about assembly line painting is that, once things start finishing, lots of things start finishing.  The downside is that, for a long time, you may not feel like you are making any progress.  But the orcs are indeed coming along, and today I took a break and started on the Milites Christi for SAGA.

But I had only purchased one mini for the year - a pre-painted TIE Striker for X-Wing.  Sure, some Warpath models had arrived, but I am not counting them, since they came from a KS pledge a year ago.  Likewise, some other X-Wing models arrived - not counted because (1) pre-painted; and (2) ordered in 2015.

But I just placed an order for the "Liberty or Death" set from Warlord Games.  I went from virtually nothing for adding another 300 models to my pile of unpainted plastic.  On the plus side, if I can get my SAGA stuff and the Dystopian Wars painted before it gets here, I will only be in the hole by 150 models or so.  Possibly even less.

Yeah, it's going to sit on a shelf for a couple months, but it was on sale at price way too good to resist.  I just have to clear the queue now, and I hope this provides some decent incentive.

(And, I might wind up picking up another round of minis in the next couple of days.  Big project, for late this year.)
Posted by Garou at 5:46 PM No comments:

So, the painting is continuing, which is good, because AdeptiCon is 69 days away.  I think I need to finish about 3 models per day, on average, in order to make it.  And no, I will not finish 3 models today.  That's not going to happen.  So, where do I stand?

The Warmahordes model is running a bit behind.  I have the main colors done, and now am doing detail work.  He will be done and mailed on Tuesday, but I will not make tomorrow's post.

The Orc army for Kings of War - all of the axe and great axe minis are assembled.  The boars are put together, but need some hot water and green stuff to get them to work.  Haven't even started on the riders yet.  All foot troops are primed, and I should have skin tones on about 40 of them done today, and move on to armor and fabrics.  Another 20 or so are currently primed black, and I will start on their skin tonight or tomorrow.  Or possibly Sunday - I really could use a couple days where figures really start to look like I am making progress.

SAGA army #1 - Anglo Danes.  I have started on a couple of guys, but it was mainly an excuse to fire up the airbrush and get it working again.  I plan on spending some quality time with these guys in the next week or so, and moving them away from primer white.

SAGA army #2 - Milites Christi.  I haven't done anything with these guys, and that needs to change.  So, again, sometime this weekend, I plan on spending an hour or two putting some paint on them.

Arena Rex - still primed, and they won't be changing for a while.  It is not an AdeptiCon event, so they are kind of low on my priority list.

Guild Ball - I have three teams (though two of them are just starter boxes with an extra model or two), but I am hoping to start block out some paint on the Brewers next weekend or so.

Dystopian Wars - I chose a fleet, and I think I have a paint scheme.  Now, I need to build some armies and start painting.  Fortunately, 1/1200 naval (or whatever the scale is) paint fairly quickly, at least to the 3-color, tabletop standard required by AdeptiCon.

So, my painted models for the year right now is 0 models, and 0 pts for the WM 365 challenge.  With the year already 3% done, and nothing to show for it, I would be worried, except that I think some models will start wrapping up in the next 4-5 days, and then things can really get moving.  And, I haven't actually purchased any models this year, aside from some pre-painted Star Wars X-Wing models.  And those don't count.
Posted by Garou at 12:06 PM No comments:

No news is not good news

So, I have been painting and assembling models, but nothing is actually fully painted yet, and I still haven't finished assembling all of the KoW models.  The orcs are almost complete - I need to green stuff the boars and assemble the riders, but I took a break from that and worked on the great axe warriors, and those are now about 50% assembled.  I hope to get most of them done tomorrow night, and then everything primed on Monday morning.

With any luck, I will have some time open to game on Tuesday.  If so, I might be able to take the orcs to show as a WIP to the friend whose army it is.  I still have months to get things done, but I will feel a lot better once finished models start making their way across my table.
Posted by Garou at 11:47 PM No comments:

As I said, I have some pretty big short-term painting goals.   How are those progressing?

It could be better, to be honest.  But, the orc troops are now assembled, and will be primed in another day or two.  I've started working on the boars - I have to do some significant green stuff work to get their bodies to fit together properly, but I might have everything at least glued together tonight.  Might even get some of the great axe troops assembled tonight or tomorrow.

On the actual painting front, well. . . . the WM model continues apace, and should be nearly done by the end of the weekend. I have started on some of the SAGA miniatures, mainly just basic color blocking for the chainmail.  Some of them might start looking done-ish in the next few days.  I'm working on a couple of lists for one of the Dystopian Wars fleets, to see how many models I need to paint, and working on a color scheme inspired by WWI naval cammo patterns.  Arena Rex and Guild Ball will be at the back of the queue, but since (1) those are pickup games at AdeptiCon right now; and (2) very low model count, I am ignoring them in favor of the 80-odd SAGA models and 100 or so KoW models that need completing first.

I also want to average one new resin mold per week in 2017, and start selling resin terrain items as a business (etsy store, advertising on TMP and Bartertown, etc) sometime before March.  Need to decide on a DBA name and fill out the paperwork first though.
Posted by Garou at 9:23 AM No comments:

Another new year, another chance to miss some goals

Declaring my painting goals for the month, so that I may be held accountable.

I'm trying to commit to painting 365 models this year, and also painting 365 pts worth of Warmachine/Hordes models. (Yes, I am going to double dip). So, this month, I need to do the following:


Or, put another way - paint like a madman for the next month, and see where that gets me.

Even if I miss these goals (and I will - I won't get everything done by the end of January, or even February.  I expect to be working on almost all of the above projects on the ides of March), I'll be more along than if I sat on the couch and did nothing, right?
Posted by Garou at 6:47 AM No comments: